Do you remember the ridiculous quizzes that flooded your favorite magazine as a teenager?  Take, Seventeen magazine for instance.  “What does your favorite food say about you?” “What type of guy is perfect for your personality?” Do you remember eagerly taking the multiple choice quizzes in hopes of learning some mind-blowing piece of information about yourself that you wouldn’t have been able to figure out otherwise? Oh dear, please don’t tell me I’m alone on this one. More on these quizzes in a minute…

First, let’s get a few thing straight. Close to the southern most point in Laos, the Mekong River stretches out extremely wide creating a bunch of islands.  While there are 4,000 islands (as the name implies), tourists typically visit three of the islands and locals may live on a handful more but the majority of the islands are small and uninhabited.

Brian and I went back and forth for the better part of three days trying to decide which of the islands we wanted to call home sweet home. Thankfully, each of the islands offers a unique experience that typically fits nicely with what each type traveler is looking for during their time in the 4000 islands.

It’s a bit of a trek to get down to the islands but if you have the time, it’s well worth the hike. After several long days of southbound travel on local Laos buses that didn’t have air conditioning, let alone windows, we were ready to find a relaxing and remote island with a laid back vibe. In the end, we opted for the largest of the islands, Don Khong, and retreated from the world for a bit. However, we also ventured to the other two islands, Don Det and Don Khon, by boat for a day trip.

Here is a little Seventeen style quiz to hopefully help you find the perfect guy or girl– I mean ISLAND!

How would you describe your perfect island experience?

A. I want to party with my friends and also meet new ones! The more bars and restaurants on the island the better. I want to be able to do activities both on and off the island (biking, kayaking, sunset cruises). However, I also like having the option of doing absolutely nothing but hanging out in the hammock outside my bungalow and eating banana pancakes.

B. I want to enjoy the peace and serenity of remote island life. I envision a perfect afternoon sitting in a restaurant along the river reading a book and watching the local fisherman battle it out for the “catch of the day.” If I’m feeling adventurous, I would enjoy grabbing a bike and doing some exploring all around the island. I don’t mind quickly becoming a “regular” at one of the handful of restaurants on the island during my stay.

C. I want to have the conveniences that come with a touristy island such as an assortment of restaurants to choose from that scatter the coastline as well as nicer, higher end accommodations. However, I can do without all the crowds and rowdy party people. I have an appreciation for all the natural wonders of the world. I would love following Robert Frost’s advice and taking the road less traveled (literally) to see waterfalls or catch a boat out to see dolphins playing in the water.

Answer Key:  You know the drill, the letter that you selected corresponds with the island that best suits your style.

A. Don Det (aka Pai in Laos): Backpacker’s Paradise

After being on the island for only a matter of seconds, Brian quickly found what would have been his favorite spot! Unfortunately, they weren’t open. 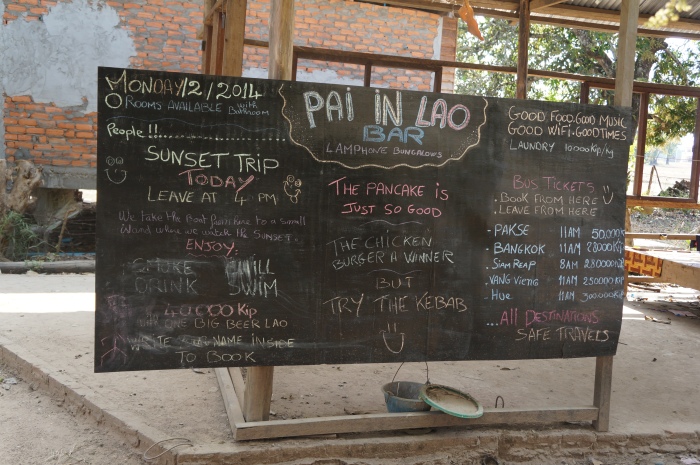 Pai and Don Det are “same, same but different” as the locals like to say!

After walking a solid five miles on Don Khong to see the dolphins (if only we had thought to rent a bike), we enjoyed a late lunch on Don Det 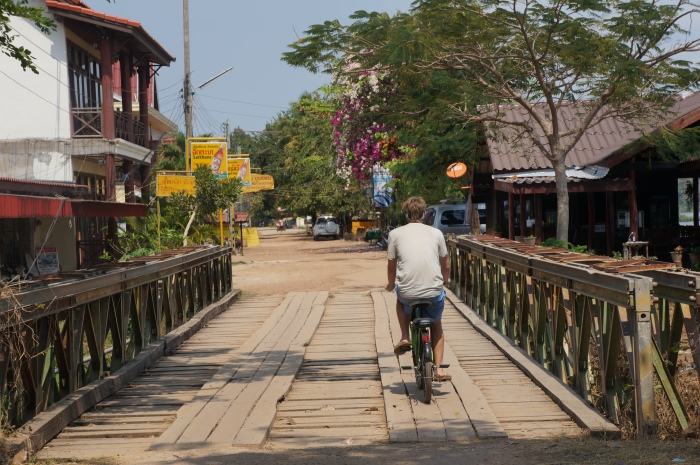 Locals buying produce for their restaurants from a grocery store on wheels! Yes, that is a songthaew.

And the world’s largest pig award goes to…

If you were wondering what the road less traveled looks like – this is it!

About to check out the Irrawaddy dolphins!

Which island is perfect for you? The beauty of the three islands is that you can spend a few days on one island and then easily make your way to another island. Don Khong is about one and a half hours away from Don Det by boat. Don Det and Don Khon are literally right next to each other and the two islands conveniently have a bridge connecting them. If time allows, you can really experience the best that each island has to offer!

While we really enjoyed our time on Don Khong, if Brian and I were to do it again we would probably stay on Don Det and find a little bungalow along the river, on the side closest to Don Khon, which is a bit more private since it isn’t as heavily trafficked as the other side of the island where all the boats come in and out. Now, Cambodia is calling…

7 thoughts on “Travel Tip Tuesday: Which of the 4000 islands in southern Laos should you venture to? It’s the great debate!”