If you ever find yourself venturing near the northern part of the Thai/ Laos border (definitely a top 10 destination for Americans, right?), you 100% have to do the Gibbon Experience.  In a nutshell, we just spent two days ziplining and trekking deep in the Laos (pronounced without the “s”) jungle and slept in a treehouse 400 feet above the forest floor.  It was an incredible couple of days.

This place was in the middle of nowhere, although you can probably say that about everywhere in Laos.  After a two hour drive from Huay Xai (Laos border town) in the back of a pickup truck, we were met by a couple of local guides who led the way into Tarzan’s territory.  After a few more hours of some intense trekking we arrived at our first zipline, miles from anything but raw nature at its finest.

This was not your typical ziplining experience on multiple levels.  After a few initial zips, the average zipline was around 1/3 of a mile, a few hundred feet over a jungle canyon, and lasted a minute or more.  Furthermore, aside from watching a safety video back in Huay Xai and some limited instruction from the guides (both in terms of content and English), we were left to attach ourselves on and off the cables.  It was more or less do-it-yourself George-of-the-jungle ziplining.  Must admit I was a bit worried about the safety until I saw the guides bouncing up and down on a zip waving their arms around pretending to be the gibbons that live in the portion of jungle that served as our playground for a few days.  Not even going to get into the views but will instead share a few pics that will not show it justice. 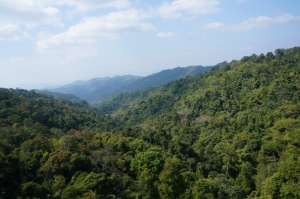 View from one of the 25-30 Tarzan ziplines. After a few times not falling, we could relax and enjoy the views!

Sunset view from the Treehouse. 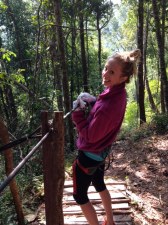 The owners hired the top ranked engineers from MIT to design and build their treehouses using the finest quality timber and American-made equipment and supplies.  Okay not exactly.  But I must admit I was pretty impressed with the Laos hard knocks school of bamboo. In six months, these guys built a three-story treehouse with probably 2,000 sq ft of floor space, complete with running water, a toilet, shower, and kitchenette.  All 400 feet above the ground.  Miles deep in the jungle.  Oh and they’re building another one that’s twice as big.  We had to see for ourselves so we zipped in there to see it. 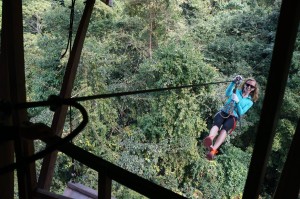 Alison ziplining into our treehouse, which is the only way to access it.

We kept asking each other, “How the hell did they build these things?  You can’t get a crane in here.  Heck, they probably don’t even have cranes in Laos.”  On our trek back to civilization, we crossed paths with another guide who spoke a bit of English and turned out to be valedictorian of the Laos school of bamboo and master engineer of the new Taj Ma-Treehouse.  Turns out they climb the damn trees to build the foundations, then set up zips into the structures and get to work on the nuts and bolts.  Simple and easy, right?  Not sure why my Dad couldn’t do that in our backyard growing up. 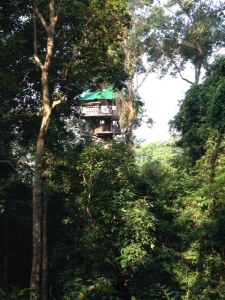 This doesn’t look too difficult to build!

Our group of five included the two of us, a Canadian, and a couple of Argentinian fellows we’re now travelling with.  It was an awesome crew, which made the experience that much better.  Here we all are in the treehouse getting set for a day of ziplining. 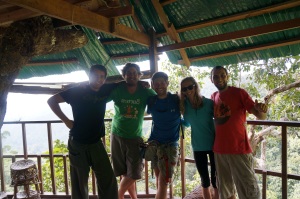 And we’ re the five best friends that anyone can have…

A few items to note in case you consider doing this (which you should):

Ironically, there are not a lot of gibbons – We heard them at night but apparently sightings are few and far between so don’t expect to be high fiving them from the treehouse or as you zip across the canopy.  The closest we got to seeing them was the intro video in Huay Xai.

It’s a bit on the pricey side – Especially relative to everything else in SE Asia, the price may seem a bit high but it’s totally worth it.  Most of the money goes toward conservation of the jungle to preserve the habitat for the Gibbons, or so we were told.  Hopefully it’s not going straight to the government. We didn’t realize this until recently but Laos is a socialist country.  I thought we wouldn’t be violating my no communist/ socialist rule until North Korea but what can you do.  Actually North Korea is on hold because The Worm hasn’t returned my phone calls…

The trekking is strenuous to difficult – There were two people in our group who quit an hour into the first trek (after planning this four months in advance).  It’s no Everest Base Camp trekking but you should be in fairly good condition if you want to pursue.  For example, if you’re a 60 year old who never had the physical ability to build a simple treehouse for his two sons in Blue Ash, Ohio you should probably just stay home and drink a few bourbons.

Bring some entertainment for after sunset – Don’t get me wrong, just being in a treehouse is pretty awesome, but Alison can get antsy sometimes.  Bring some cards and a bottle of Lao Lao liquor ($2 USD for a 750ml bottle).  That way, when you find yourself talking about inflation rates in Argentina for five hours (which is fascinating), you’ll be able to give your mind a rest when the whiskey buzz kicks in.

Also, use the shower.  Because when else are you going to take a shower in a treehouse?

9 thoughts on “The Gibbon Experience: where our childhood dreams came true”

I guess they say "Ithaca is gorges" (gorgeous) for a reason! Sorry we had underestimated your natural beauty, New York #fingerlakes
Perfect spot for some Saturday morning sipping ☕️ #frontporchgoals #thebigeasy #neworleans
We woke up and it felt like Christmas morning...in September! #winteriscoming #windriverrange #jacksonhole #wyoming #travel
"Of all the paths you take in life, make sure a few of them are dirt." - John Muir #windriverrange #jacksonhole #wyoming #titcombbasin