The next best thing to a river full of native trout is one that runs through a cave.

Alison vetoed a 24 hour bus ride from Vientiane to Hanoi (I didn’t put up much of a fight) so our next stop took us to warmer weather in southern Laos, where we’ll eventually keep going south to Cambodia and snake back up through Vietnam to complete our lengthy tour of the battlegrounds of the Indochinese wars.

We had heard about Konglor Cave from fellow travelers, namely that it was an awesome place to see but a trainwreck to get to.  So obviously we decided to go there.

We’d been told that a bus company had just started a route that led all the way to the cave but also heard repeatedly from vendors selling tickets in Vientiane that this wasn’t the case, so we hopped on board anyways not really knowing where we’d get dropped off.  Luckily, the bus took us all the way to Konglor village, where we exited with about 10-12 other tourists to chase after the remaining half dozen guesthouse rooms available in the village.  Everyone sort of realized the math and a mad dash ensued for the remaining rooms after collecting our bags.  Alison, being the champ that she is, took off in the direction of the nearest guesthouses to try and snag a room.  I struck up a conversation with a local who was offering for us to stay with him for the night along with dinner and breakfast for a reasonable price.  Fearing homelessness, I eagerly accepted this request unbeknownst to Alison who was running around like one of the chickens in the village trying to find a place to rest our heads!

We ended up staying with the family in the village, which was definitely our most “real culture” experience yet.  We helped cook the duck skewers, drank Lao Lao whiskey, and did our best to communicate.  As disappointed as we were that the kids weren’t in school (we were there on Thursday and Friday), it was cool to see how much joy they took in something as simple as tossing around empty Coca-Cola cans they had made into something resembling frisbees.  Although the family had very little, they went to great lengths to help us feel comfortable, including a mosquito net for our mattress pad and providing bottled water (their water supply for literally everything came from a garbage bin behind their home).

Digs for the night 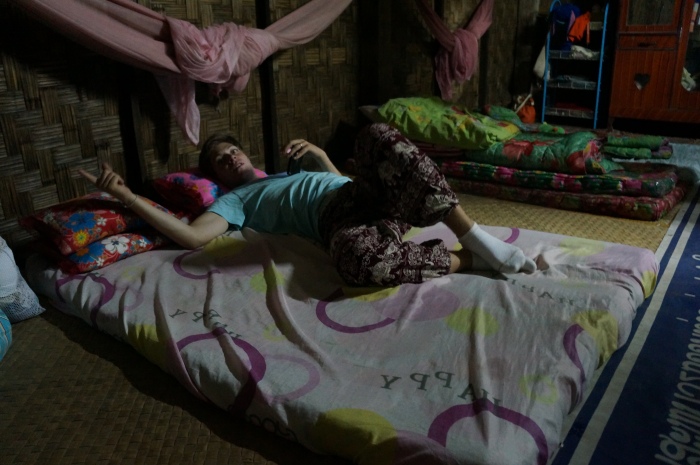 We had a nice little setup

Although we thoroughly enjoyed the homestay, our cultural exposure was mostly observatory in nature since the family spoke very little English.  Our verbal interactions with their parents went something like this:

Us: “What time should we go to the cave tomorrow?”

Us: “What time is breakfast in the morning?”

Us: “What time can we get a tuk tuk to Ban Na Hin (the nearest village out of Konglor)?”

Us: “Morning or afternoon?”

At that point we just reached over the dinner table for more Lao Lao whiskey.  Then the one-word game continued with the mother toward the end of dinner…

Us: “[making bloated signs toward our stomachs] Full! Full!”

The exception to the one-word/number English vocabularies was when the father tried to get us to stay an extra night so he could take us on a hike to see “monkeys” after the cave (emulated by doing monkey sounds and pointing to the mountains), which we later found out did not exist and was likely a ploy to get us to stay and pay them for an extra night.  The more Lao Lao we drank the more he brought up the monkeys.

Perhaps the most life-changing part of this experience was a newfound food obsession.  Alison and I are officially in love…with sticky rice.  More specifically, sticky rice with jaew, a mixture of hot peppers, fish oil, onions, garlic, and other goodness.  It’s basically a dip for sticky rice.  The mother introduced us to this amazing mixture and a day hasn’t gone by since we haven’t indulged. 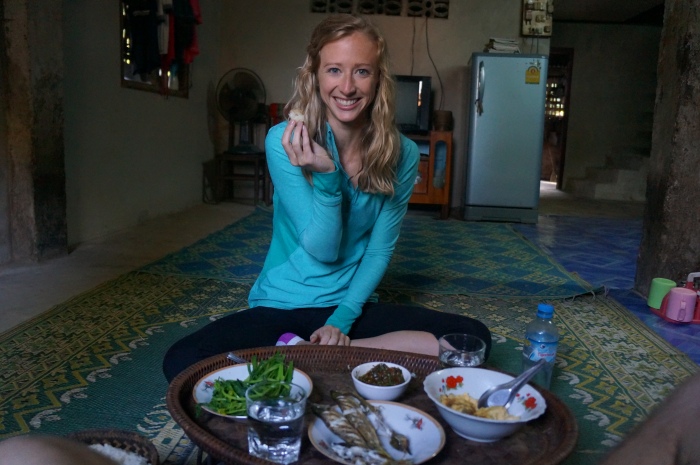 Our awesome breakfast at the homestay, including eggs, local fish, some type of broccoli, and of course, sticky rice with jaew

Pic of sticky rice with one of the puppies running around 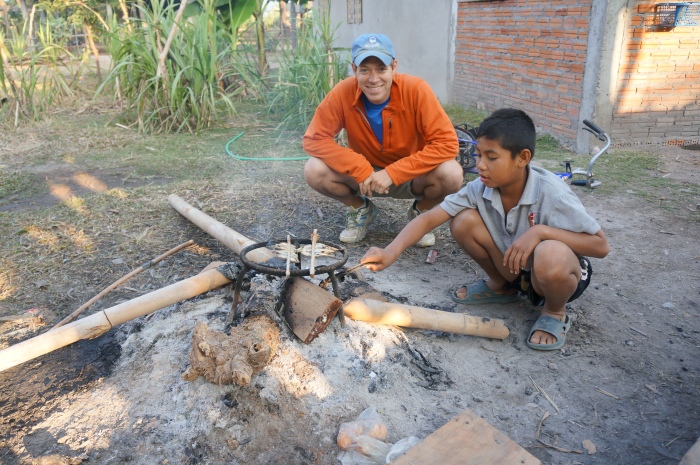 One of the kids cooking the fish for breakfast

So the cave was awesome and definitely worthwhile.  At 7.5 km long, several hundred feet high in spots, and full of huge of stalactites and stalagmites, it was pretty spectacular. What makes it even better is that you take a boat to drive you all the way through the cave on the river that runs under it.  Cave pics do not turn out too well but this gives you a taste: 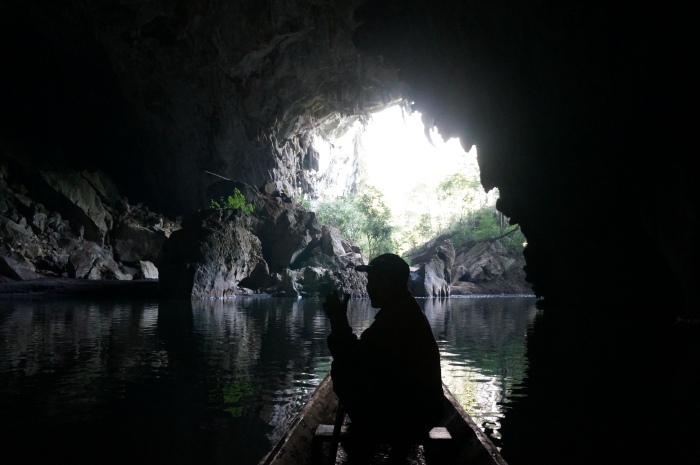 End of the 7.5km journey (before heading back). Our guide was old but agile

Since there is nothing else in the village and it’s mostly supported by tourism, Konglor village is kind of like a frog trap – they make it easy to get in and nearly impossible to get out so you are stuck there spending more tourist dollars. We ended up taking consecutive songthaew rides of 45 min from Konglor Village to Ban Na Hin, 90 min from Ban Na Hin to the rt. 13 and rt. 8 junction, 90 min to just outside Thakhek, then tuk tuk to downtown Thakhek. The 13/8 junction to Thakhek leg probably could have been replaced by a bus ride if we waited around for something heading our direction.

If you go the cave coming from Vientiane on your way to southern Laos, we would recommend the following:

The village consisted of tobacco fields surrounded by beautiful mountains

Have you been to Konglor Cave? Do you like sticky rice, too? Am I a terrible writer? We’d love to hear from you in our comments section below.

28 thoughts on “Konglor Cave experience, where a river runs through it”