Komodo National Park and the surrounding region in and around Flores is one of our favorite places on the planet.  Despite fairly easy access from Labuan Bajo (a 1 hour flight from Bali), Komodo National Park was virtually empty when we were there.  Go now before the world finds out about this place!  Here’s why:

Komodo Island and Rinca Island have bragging rights as being the only places in the world where Komodo dragons live (aside from zoos obviously). In addition to their venomous saliva, Komodo dragons have also made a name for themselves as being the largest species of lizard. On Komodo island, we were lucky enough to hang out with the Komodo dragon that has claimed the superlative for being the “biggest and baddest” Komodo in the world. According to our guide, this particular dragon measures 3.8 meters in length. Two words – watch out! We’ve been told these dragons know a thing or two about sprinting as well.

With our stick to defend ourselves, we were ready to take on the Komodo dragons!

The largest Komodo dragon happens to be pretty photogenic!

A female komodo dragon we stumbled upon…

As we quickly learned firsthand, Komodo dragons can, on occasion, be quite feisty. Within three minutes of starting our walking tour on Rinca Island we scored a front row seat to some five star entertainment as two Komodo dragons went head-to-head in a fight. Well, it was actually head-to-tail as one Komodo dragon whipped it’s long, thick tail around only to make direct contact with another komodo’s intimidating jaw line. Our guide was giddy with excitement as apparently this isn’t a common occurrence. Meanwhile, our entire group went scurrying for safety as the two komodos played a heated game of chase! 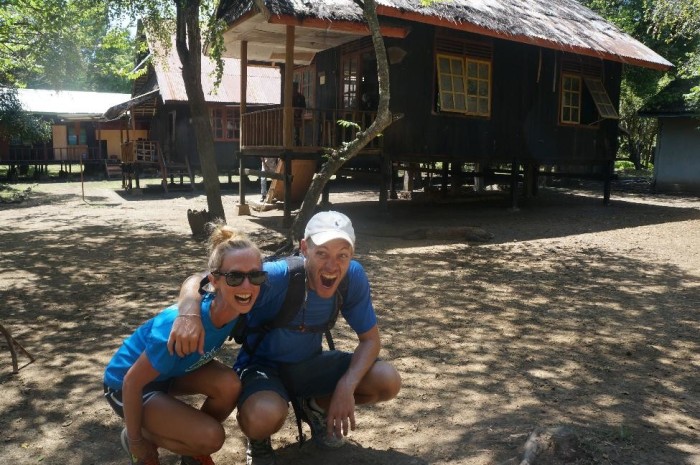 It was all fun and games until the fight broke out! 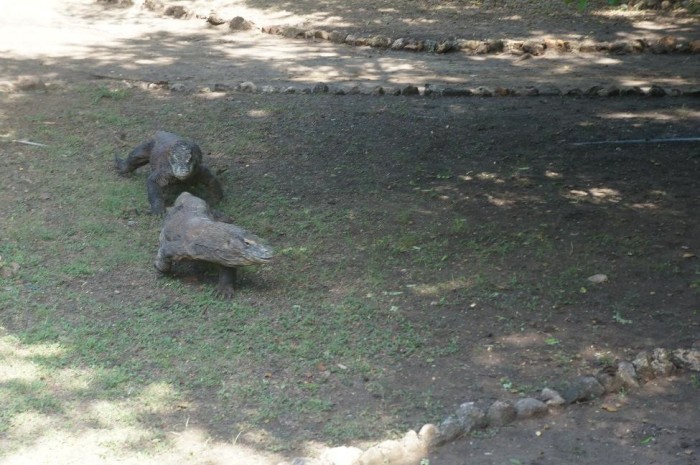 The high speed chase that followed the fight! 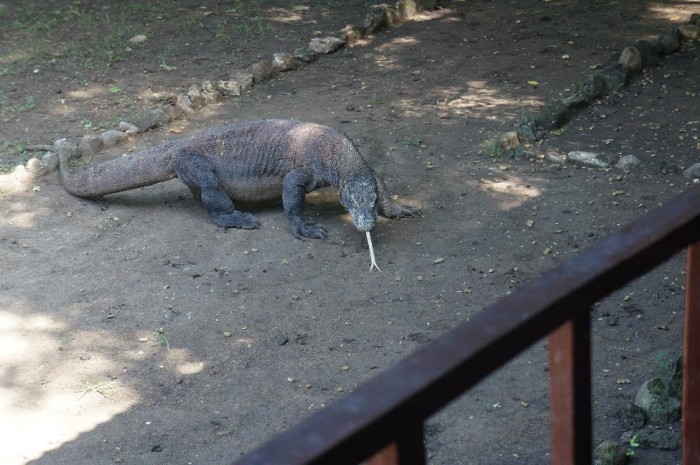 The Komodo dragon that came out on top.

It forces you to face your fears

In Komodo National Park, you can also find out exactly how fearless you are when you’re faced with life threatening danger.

In case seeing the komodos brawl only a few short feet from us on Rinca Island wasn’t enough, our experience on Komodo island the following day had me questioning whether or not I had what it took to make it in Komodo.

While trekking along the trail on Komodo island, we all abruptly halted as our guide started jumping up and down exclaiming, “It’s your lucky day! Look at the spitting cobra!” I hear the word cobra and immediately beelined it down the trail away from the venomous reptile. As I turn around to check on Brian and Matt, I see the cobra flying mid air towards the two of them. Our guide used his stick to rile the cobra up and in a desperate attempt to get Brian and Matt to take a picture of the cobra, he decided to take matters into his own hands and get the spitting cobra as close to the two of them as possible. Yes, you are correct – our guide lost his mind. These particular cobras can kill you in literally five minutes flat. After Brian and Matt refused to get close enough to get a picture, our guide snaps our camera and gets the camera in the cobra’s face.

Meanwhile, I’m pleading with him saying that it’s not worth the pictures if someone is going to get killed! As you can tell from the picture below, he didn’t listen. Just a friendly suggestion to Komodo National Park – you should probably institute some sort of screening policy to ensure the mental stability of your guides prior to hire. While our guide referred to it as “our lucky day,” I beg to differ.

An up close and personal shot of the spitting cobra.

While scuba diving, we frolicked in the water with massive manta rays, octopus, bamboo sharks, turtles and lots and lots of beautiful fish! The currents in these waters were no joke. We’re amateur divers so we steered clear of the advanced diving spots but even so, the easier diving locations proved to be a true test of what we were made of.

I spent the good majority of our first drift dive trying to get my bearings and fighting the current instead of gliding along with it. It’s an absolute shame because with both my arms and legs flailing around I couldn’t enjoy the beautiful coral reef in front of me!

Thankfully, I got my act together during our second and third dives. To date, one of our all-time favorite travel experiences was when we were diving with the manta rays! They are such incredible creatures. They can span over 20 feet across but despite their tremendous size, they make their way through the water with such grace! I also appreciated the fact that they pose little threat as they can’t sting you and can’t kill you. Thankfully, they prefer to consume plankton (not humans).

Taking a break in between dives with our awesome scuba diving crew!

Take my word on this one. How can you beat incredible snorkeling right off the beach, water so clear that it gives the Bahamas a run for it’s money, the best sunrises and sunsets known to man and a simplistic island atmosphere that entices you to stay longer than you ever dreamed?

We knew we landed somewhere special when within the first few hours of our arrival on the island we had snorkeled with black tip reef sharks, swam side by side with a turtle and witnessed the best sunset we have ever laid our eyes on (and that is no exaggeration)!

Kanawa Island’s resident dog joined us for our early morning hike to the top of the hill to see the sunrise.

Aerial view of the beach bungalows.

Kanawa Island is a special place – sad to say goodbye.

Captain your own boat and “sail away, sail away!”

We booked a two day snorkel trip (or maybe more appropriately called snorkeling extravaganza) which allowed us to explore the open waters within Komodo National Park by boat. In an effort to save some dolla dolla bills and in the name of good fun, we opted to book a trip where we slept on the boat deck versus a cabin. It was pretty comical as we had mattress pads lined up on the deck one right next to the other. Boat themed slumber party anyone? It was a very unique experience and a lot of fun!

The marine life is really too incredible in Komodo to limit yourself to one snorkeling spot or really even a couple. The two day boat trip worked out perfectly because we could cruise around the water and snorkel as we wished! In addition to snorkeling, it was during our boat trip that we ventured to Rinca Island and Komodo Island as well as pink beach on Komodo. We also saw the flying foxes as they magically flew out of the mangrove trees at sunset!

Some people do day trips to both or one of the islands. However, we opted to do the two day boat trip with some snorkeling throw into the mix and we’re really happy we did! There are very few opportunities that you can live aboard a boat without thousands of other people and the spread of crazy diseases. Carnival, anyone?

Exhausted after a long swim and snorkel with the manta rays!