Java has some super cool places to visit, including cultural areas like Prambanan and Borobudur, and volcanoes like Ijen and Bromo, but please don’t try to see all of it in five days like we did!

Jakarta was our first top in Indonesia and to be honest, probably the least memorable. We had been warned by other travelers that Jakarta offers little more than an overpopulated city with lots of pollution. After arriving early in the morning, we opted to take a night train out later that night and make our way to the culture and cleaner air that awaited us in Yogyakarta. Thankfully, we found a little restaurant in Gambir Train Station with good wifi and camped out there for the day.

Jakarta doesn’t seem to receive as many tourists as the other parts of Indonesia and for that reason, every time we looked up from reading or playing around on our ipad we had a new set of eyes inquisitively watching over us. Children would take notice of us and frantically grasp their mother or father’s hand and nestle themselves under their parent’s arm for protection as they stood staring up at us both frozen and bug eyed. Apparently having blonde hair and fair skin is the equivalent to being seen decked out in a Halloween costume on any day other than Halloween. We’re not sure exactly what was going through these small children’s heads but we can only leave it to our imagination!

Our train arrived in Yogyakarta just before 6 AM the following morning and we were welcomed to the city with a gorgeous sunrise right as we walked out of the train station. It was so beautiful that we actually stopped and stood there for a moment in complete and utter amazement. In Nepal, we had woken up at 5 AM on several different occasions in hopes of setting our sights on what we had heard were gorgeous sunrises in Pokhara and Bandipur but it was to no avail. Clouds and fog became our nemesis in Nepal. We didn’t know it at the time but breathtaking skies and unique cloud formations were going to be a constant point of awe for us during our time in Indonesia!

After renting a motorbike, we made the hour long trip to Borobudur temple. Rumor has it that it’s the largest Buddhist temple in the world and we found the history behind the temple to be pretty fascinating! After being built in the 9th century, Borobudur was later abandoned after Mount Merapi, a nearby volcano, erupted leaving the temple covered in ash. Deeming the temple as no longer holy, the Buddhists abandoned this incredible temple. Consequently, Borobudur was buried under volcanic ash and jungle overgrowth and lay hidden for centuries before being rediscovered. We’ve certainly been to our fair share of Buddhist temples and Borobudur is by far our favorite!

The top platform of the Borobudur signifies attaining Nirvana.

Is that a monk hiding behind that Buddha statue?

Local students walking around with clipboards added to our amusement during our visit. Pairs of students stopped us to practice their English with us. Each of them asked us the same series of ten questions and each time we provided the same ten answers. We pretty much had the routine down. However, one of the students got ambitious and decided to go off script and politely asked me, “Is this (pointing to Brian) MY husband?” Brian and I couldn’t help but throw our heads back and start belly laughing. Well, we’re no religious gurus but the last time we checked it was only kosher for a man to have more than one wife with the Muslim faith not the Jewish faith. Seeing as that she was Muslim, it only add to the humor of the situation. We tried to explain that the correct way to ask the question would be to ask, “Is this YOUR husband?” It seemed to be a lost cause as she gave us a confused expression. Perhaps it would have been better to have responded, “Yes, this is your husband!” and left it at that!

It might have had something to do with the fact that we had been dodging cars, motorbikes and pedestrians for over an hour while driving our motorbike to the temple or the fact that Prambanan just felt like a mini version of Angkor Wat but either way we weren’t completely blown away. Prambanan is remarkable in its own right and certainly a sight worth seeing if you’re in the area but if you’ve seen Angkor Wat and you’re limited on time, you can get away with skipping it (in our humble opinion). What did make our visit worthwhile, however, was the sun setting behind Prambanan. Indonesia is blessed with the most beautiful array of vibrant colors particularly at sunset and the evening we spent watching the sunset at Prambanan was no exception. It honestly looks like someone took a paintbrush and splashed color all over the sky!

After Prambanan, we decided to top our cultural day off with the Ramayana Ballet that night. The small theater where the ballet is performed is near the temple so we made our way to the theater and bought two “class II” tickets. The theater is small and intimate so really any seat is a good seat and paying for VIP seats is simply a waste of money. While it certainly was no New York City Ballet performance, it was an entertaining with elaborate and ornate costumes and lots of Javanese dancing. No ballet pointe shoes or tutus for these dancers! Did I mention that Brian was a trooper? He most definitely was!

Beeeep. Beeeep. Beeeep. Alarm clock goes off at 3:30 AM. Our bus finally dropped us off at our hotel at midnight the night before so after just over 3 short but precious hours of sleep you can go ahead and guess how many times we hit snooze. Quite a few. It was only after remembering the promises of an unforgettable sunrise that we finally opened our eyes and mustered up the strength to get moving. When you visit Bromo, you have an option to go to a viewing point to see the sun rising over Mount Bromo, Mount Semeru, Mount Batok or climb Mount Bromo for the sunrise. Let me just stop right here and say that it’s well worth the extra money to go to the viewing point. Brian and I almost didn’t and had we not, we would have seriously regretted it!

We climbed in the Jeep with a really nice Austrian couple we met and headed up the mountain. The Jeep only took us to a certain point so after getting dropped off, we climbed up for an hour until we reached the top. It’s amazing what Brian is capable of when he is not fighting crazy symptoms of altitude sickness. The Jeep was late picking us up from our hotel and Brian was bound and determined to make it to the viewing point before the sunrise so in order to make up for the lost time, he quickly assumed the position of “leader of the pack” and set a pace that left me gasping for air. After observing everything that Brian went through in Nepal, I was relieved to see him hiking again in prime condition! The views from the top were just spectacular and words cannot even begin to describe the sheer beauty of it all so I’ll let the pictures do the talking! 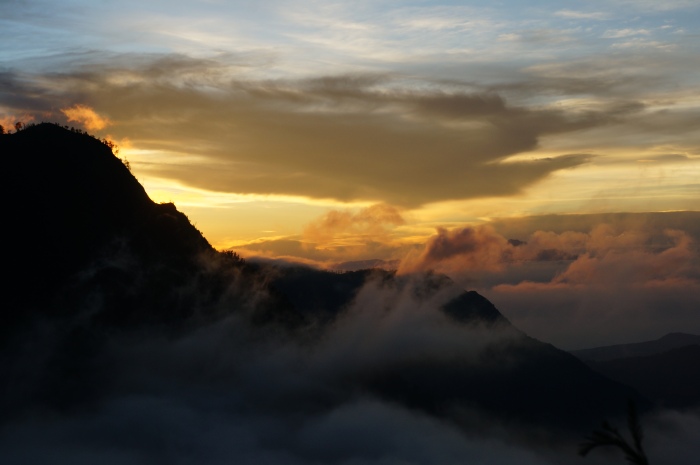 We felt like we were standing on top of the clouds!

Afterwards, our Jeep shuttled us over to Bromo where to our surprise we were joined with hundreds of other tourists. Apparently, we weren’t the only ones with the brilliant idea of visiting Mount Bromo that morning. We were visiting during Indonesia’s shoulder season (April) so we didn’t anticipate the crowds to be awful. Either way, Bromo was not what Brian and I were expecting at all. The volcano is, of course, pretty incredible but the experience of climbing the volcano was a bit lackluster.

It honestly felt like a volcanic amusement park. Pony ride anyone? As soon as you arrive, you have the opportunity to purchase a ride on a horse which will take you up the first portion of the climb (in the event you are feeling lazy). After a short climb or ride, depending on your preference, you are met with a large staircase that you take up to the top. The neatest thing we did while at Bromo was climb up along the caldera. While we were climbing along the caldera, it happened to get really cloudy and hazy. However, we were still able to see an awesome view of the crater and surrounding volcanoes before the clouds rolled in!

Pony rides – come one, come all! 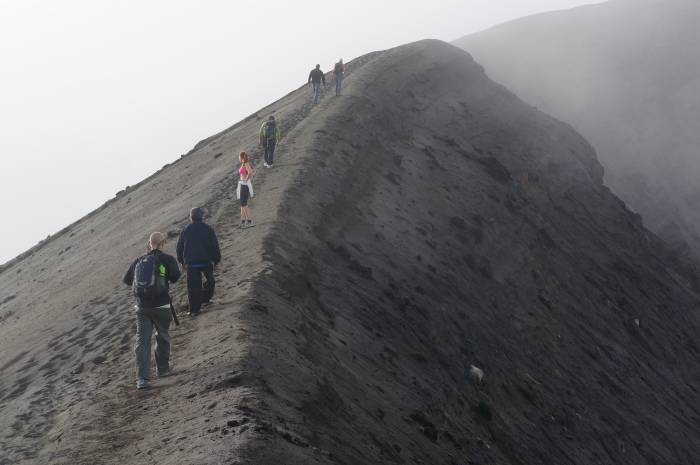 Brian conquering his fear of heights as he walks along the caldera! 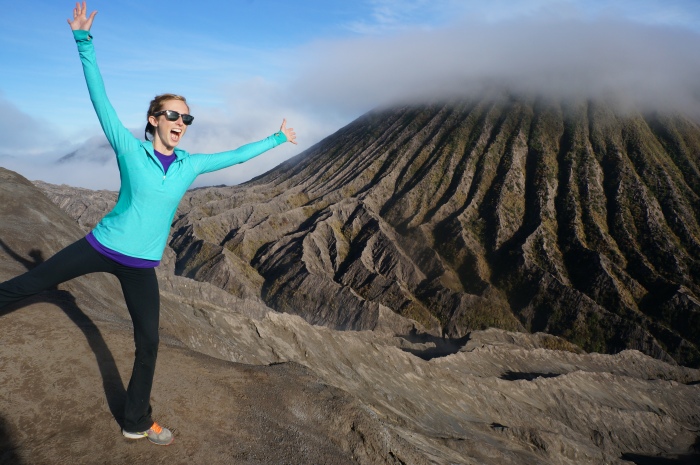 Enjoying our view from the top! 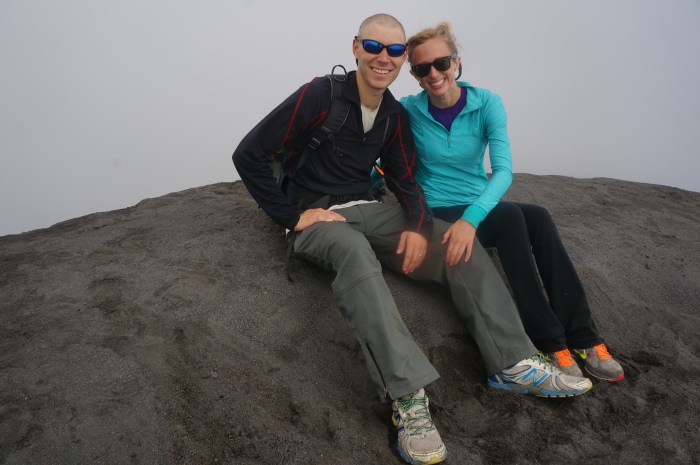 Check out that visibility behind us!

Ijen – one of our favorite things we’ve done during our travels so far? Absolutely. After a pre-dawn hour long bus ride, we started our trek up the volcano. The trek is a serious early morning workout as we found it to be pretty vertical. However, the views on the way up are gorgeous and provide the perfect distraction from all your huffing and puffing. Who needs a Stairmaster workout? After this hike, not this girl. Burn, baby, burn.

A display of beautiful colors beginning to appear on our hike up!

During the hike, we saw sulfur miners bringing heavy loads of bright yellow sulfur down the volcano. At certain points, we were inhaling straight sulfur fumes which I’m sure our lungs greatly appreciated. I’m pretty sure I can thank the sulfur fumes for the lingering cough I had for a week or so after visiting Ijen Crater. It makes you really feel for the miners as they endure such hard labor on a daily basis in far less than ideal conditions. 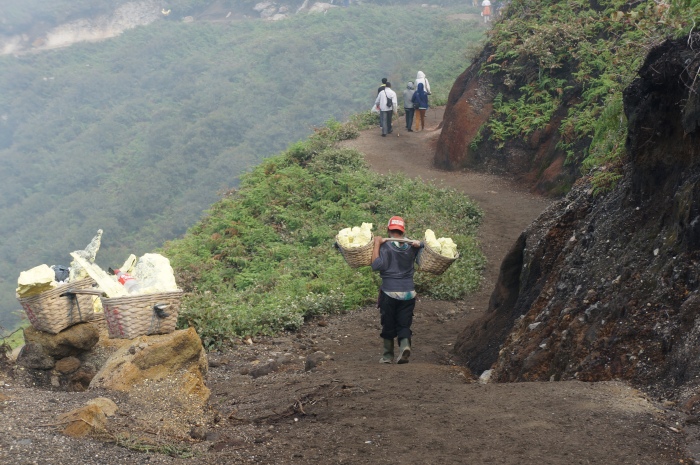 The miners carry between 130-175 pounds of sulfur each trip.

Alas! When we finally reached the top and we first lay our eyes on the crater, we were awe struck! Our eyes were overstimulated as we took in all that was before us – the massiveness of the crater itself, the smoke creeping up from the bottom, the enormous turquoise lake, the miners at the bottom hard at work collecting the sulfur, and the sun rising over a neighboring volcano. It was quite a sight to see! We walked along the crater rim for a good distance and took in the crater from even more viewpoints. As we did, the Ijen crater became even more beautiful!

Brian taking in the picturesque view!

Sulfur miners hard at work down below. 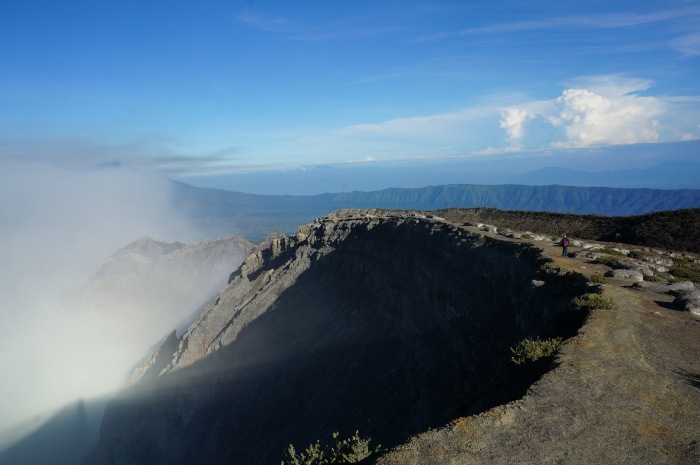 Brian walking along the crater rim taking in different viewpoints of the lake and crater. 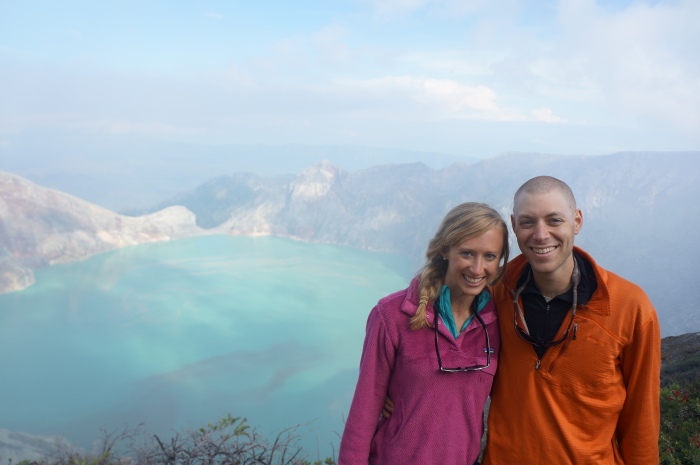 I would be lying to you if I said that Brian and I enjoyed every second of our time in Java. We loved the sites we saw and the cultural experiences we had. However, Java is a massive island. It’s a lot of land to cover especially by bus and I’m still not quite sure why but we elected to do it in record time which only added to the element of fun or absolute exhaustion depending on how you look at it. The two back-to-back nights of little to no sleep, with our red eye flight to Jakarta and then our night train to Yogyakarta the following night, probably weren’t the best way to prep for the three long days of bus travel and two pre four AM wake up calls but hey, you live and you learn. When we look back at all that we were able to see and experience, it’s a small price to pay right? Most definitely!

7 thoughts on “Traveling in Java: The Good, the Bad and the (Not So) Ugly”