One of the first major differences we noticed upon our arrival to Southeast Asia was that the restrooms are very different than what we’re accustomed to in the States. Before you scoff at our profound observation, hear me out on this one. The restrooms are so different, in fact, that I would have greatly appreciated a little heads up before we were completely blindsided upon our arrival.

BYOTP (Bring Your Own Toilet Paper)

First and foremost, the bathrooms are BYOTP. That’s right – you will rarely (and I repeat, rarely) find a public restroom with toilet paper. Local women literally walk around with toilet paper in their purses (or they don’t use it at all which is pretty unfathomable). One time I forgot the restroom house party rule of BYOTP and I had to awkwardly ask a local woman if she wouldn’t mind sharing her personal stash of toilet paper. When I told Brian about this incident he laughed and impersonated Elaine from Seinfeld saying, “Can you spare a square?”

We should probably also address the fact that soap is essentially non-existent in public restrooms as well. When you go to use the toilet here, you get just what you asked for – a toilet! The toilet paper, soap, and paper towels/hand dryer are just extra fluff that only we westerners deem as necessary. I have three words for you – pack hand sanitizer!

Automatic Flush? You Must Be Crazy!

Most public restrooms have toilets that do NOT flush automatically and by automatically I’m not talking about hands-free flushing. This may be difficult to envision so I’ll elaborate a bit. Instead of hitting the handle on the side of the toilet to flush it, you have to manually flush it. By this I mean you have to take the little bowl laying next to the toilet (it’s actually provided for you) and fill it with fresh water from a bowl or bin which is also next to the toilet and then you proceed to pour the bowl filled with fresh water into toilet and voila – that my friends is how you manually flush a toilet! I bet you’re a little more grateful that you have an “automatic” flush now aren’t you?

Redefining The Way You Shower

When you hear the word “shower,” what comes to mind? I’m going to go out on a limb and guess you probably picture a shower head with a tub, a shower curtain and maybe some built in shelving for your shampoo, body wash, etc, right? Well, the first time I took a shower in Bangkok I was completely confused as to what was going on. I didn’t understand why the shower head was squirting water all over the toilet, the sink, and the bathroom floor. The water coming down from the shower head was not contained to a specific part of the bathroom as it is with a tub and shower curtain or a shower with a door. Instead the shower head had the authority to squirt water every which way creating a make shift slip ‘n slide. Thank goodness for the small drain on the floor that catches and eventually drains the water that’s flooded the bathroom!

Leave Your Shoes At The Bathroom Door

For an unknown reason that I have yet to figure out, it is common practice to remove your everyday shoes upon entering a restroom. While this is typically done in private residences or guesthouses/hotels/hostels, the shoe police sometimes enforce this practice in public restrooms as well. Luckily, you can trade in your shoes for stylish sandals during your time in the bathroom so you won’t leave with a nasty foot fungus. 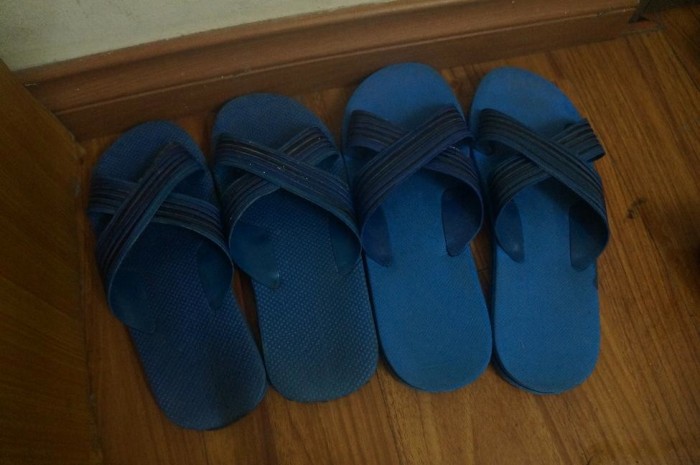 Who wouldn’t want to rock these sandals in the bathroom?

As I mentioned before, this is not the case for all restrooms in Southeast Asia but certainly a good majority of them!